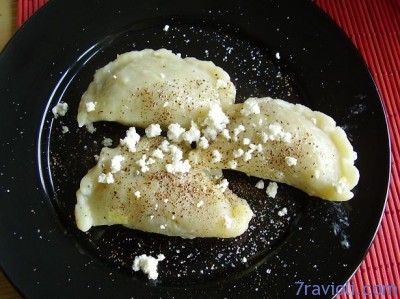 Cjalsons? What what what is that?

In Italy there are many words to name A Thing, which not so experienced eater would simply call A Dumpling, but even in Italy not everyone knows, what is Cjalsons.

It’s the friulian name of Agnolotti – is the explanation.

It’s a Dumpling!- to put it really simple.

I have to mention that for the chance to get to know about Cjalsons I am thankful to Rossella, the foodblogger from Italy, who asks with her blog –Ma che ti sei mangiato? – What have you eaten?

About 40 foodbloggers (me included!)  make cjalsoni internationaly in the momory of great chef Gianni Cosetti, whose restaurant “Il Roma”, located actualy not in Roma, but in Tolmezzo (Friuli Venezia Giulia,) was worldwide famous. He proposed a cuisine able to win one star Michelin!

Giani Cosetti collected and promoted local recipes and cjalsons are one of them.

He organized contests of cjalsons between local women, and each came with her own recipe. Not to lose local recipes, Gianni Cosetti put them into the book “Vecchia e Nuova Cucina di Carnia“

Taking part in the event, initiated by Rosella, I got from her 9 different recipes of cjalsons and one of them I have chosen to make.

When I saw, how long is the list of ingradients…oh, man! – I couldn’t imagine what the result may I expect from mixing so many different things.  So it was very interesting.

1. Grate biscuits and chocolate, ground peanuts, nuts and candied citrus peel, then prepare the filling, called “pistum”, with all these ingredients.

2. Boil potatoes, peel, pass through a sieve and mash. Add the flour, a tablespoon of lard, oil and salt, mix well.

3. Roll out the dough on a floured pastry board and cut into discs with a diameter of 8 cm. On every disc put a spoonful of filling, fold in half and tightly pressing the dough edges.

4. Place the Cjalsons in boiling salted water, where you pour a tablespoon of oil. Gather with a skimmer when they come to the surface.

5. Then place them in a pan, season with grated smoked ricotta, cinnamon, sugar and pour over cooked hot butter, called “ont.”

After preparing, cooking and tasting Cjalsons di Piedim, one thing I may say, beeing absolutely sure: No, Cjalson is definitely not A Dumpling!

Promote Your Page Too